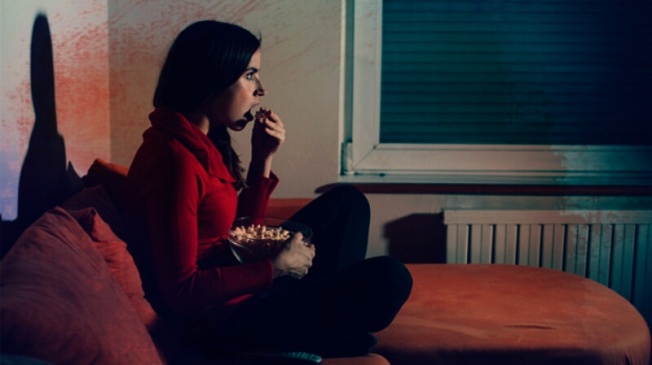 For better or worse, I am perfectly fine with using the tv as a babysitter at certain times. I used to love the tv on all day as “background noise,” though don’t anymore. I like watching a show while eating dinner. I’m cool with binge-watching on the weekends.

Except, lately, I am not, even though I am drawn to that standard American mindset. I want more for our family – I want outdoor hours not just because of Charlotte Mason, but because of healthy biomechanics/Katy Bowman. I want to stop seeing my children be zombies and want them to again want to play outside or inside, by themselves or with each other.

I have wanted to put our tv/PS3/sound bar on a pretty rolling cart and leave it in our office except for rarer occasions.
And then Daryl said just before Christmas that “things were going to be different with the tv, starting in the new year,” to the kids. We hadn’t talked about it yet.
I still was trying to resolve myself to what I had been thinking about, before I took it to Daryl, who I knew would probably be thrilled with what I wanted.
So, the children and I spent the next week and a half doing what he wanted – no tv all day until 7pm. We were still on Christmas break, so had no schooling schedule. Reading, playing games, playing outside, taking walks, drawing and coloring were done a lot.

Then, the day before New Years, Daryl was tinkering with something I needed him to do, while I was making lunch. I wanted to put Tumble Leaf on to keep Leela and Stryder away from the Honey-Do going on and away from a hot, bacon-splattering stove, and allow Melody some quiet time. Daryl said it didn’t get turned on until 7.
I had it. This wasn’t my decision at all. I wasn’t ready for it, and I let him know I didn’t like being treated like a child with no say in the matter.
Though he put up a good argument as a Type 3 naturally can, I eventually saw a look of defeat, and he said he’d drop it. We could do whatever we wanted.

Except, that’s not what I wanted. I didn’t want to “constantly watch tv,” nor did I want my husband to feel like we were not working together. I just wanted to be a part of the decision and to take ownership of something that, for me, feels REALLY big to let go of and change.

So, here Daryl and I are, ready to basically stop watching tv. I think I am waiting now for the perfect tv cart, knowing as long as it’s out in our living room, it’s temptation. In another room, it’s a hassle to bring in and out every day.